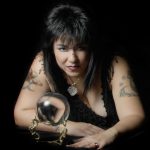 Luna Shimada has been performing in top venues across the world from Europe to Japan to America, and the showrooms of Las Vegas. Luna was also the recipient of the prestigious  “World Magic Award”  as “Best Female Magician” which aired nationwide on prime time Fox network.

Luna is a philosopher and a teacher of magic and her many talents encompass  writing, dance, performance art and Motivational speaking and spoken word poetry. Luna began her career on stage early at the age of 12 and has spent the last 30 years honing her craft and is now recognized in the world of magic today as one of the best female magicians of our time. Luna has paved the way for many woman to follow in a profession that has primarily been a male dominated field. . In other words, Luna just rocks! according to “Rolling Stone” magazine. She is the quintessential renaissance woman of our day.